Devblog 1: Why a good vision is so important we spent a year on ours

Let’s get down to business

Why is a good vision important for your game? To answer that, let us start with some context. It’s not a secret to anyone that the games market is increasingly saturated with good, quality products that are fighting for your attention and money. The games industry has talked about the ‘indiepocalypse’ for years now, a popular term for the negative consequences of the increasing numbers of new game releases.

According to this article by Steven T. Wright, a lot of game development veterans are concerned about the growing supply and competition. Most new games sell fewer than 500 copies, even those who seemed destined to become big hits. 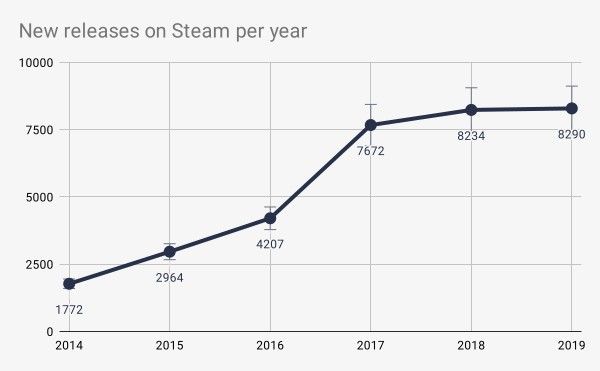 The ‘indiepocalypse’ seems to have settled on approximately 4,6 times more game releases per year than 2014, which is a lot of new games competing for your attention!

But it’s not all doom and gloom.

In this GDC talk by Jason Rohrer, he shows how a well thought-out game design that continually generates unique situations for players to experience is the way forward. Be innovative and memorable, and there will be an audience that genuinely wants to experience whatever your game excels at. And that means you need to have a clear vision for what your game is. 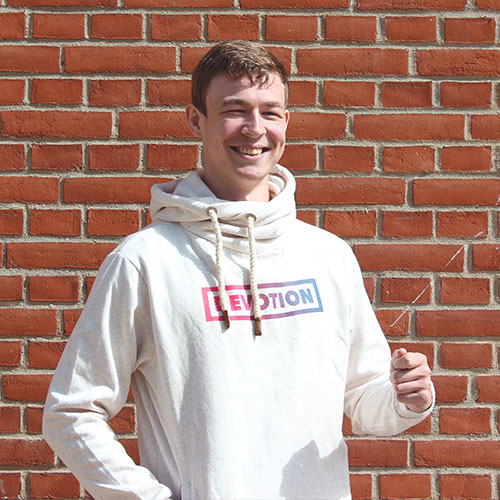 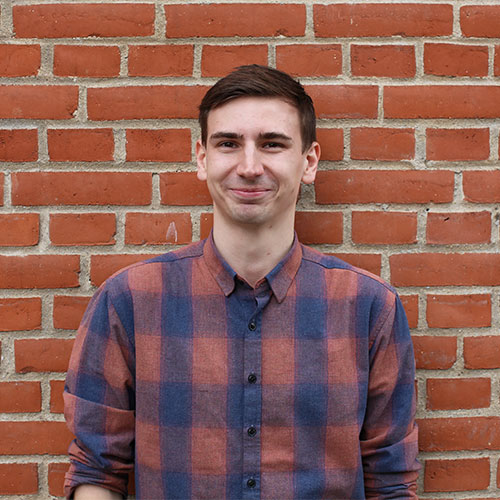 Envisioning something innovative and memorable

What is our own vision then? And how did we come up with it? Let’s start with our ‘why’ for developing Project Tumble.

All members of the team here at Digital Devotion Games have felt that there is something missing in the current roster of multiplayer games. The games are mostly either

The latter one is particularly damning, since we’ve discovered through our research that a lot of people buy casual party games, play them for a single playsession, and then never pick them up again. These games have a lot of quantitative replayability, but lack in the experiential quality that pulls players back in.

In short, you’re either punished for not being good enough, or streamlined into superficial gameplay. Often, neither allow for much personal expression either.

Now, both of these kinds of games are perfectly fine and popular, but we wanted something different. So, like any entrepreneurial spirit would, we used this felt dissonance to propel us forward.

In addressing these problems, we saw an opportunity in centering the game around the feeling of going on imagination-filled adventures and playfully teasing each other, like when we were kids venturing out into the woods or local neighborhood.

We decided to develop a multiplayer game that

With all of this in mind, we began toiling away on the framework, design and direction of Project Tumble. We established some initial design pillars to help support development:

A good starting point to keep us aligned in our development.

Pillars are essentially the 3-5 main elements of the experience your game is trying to provide. Having those elements written out helps align the team towards commonality. Every new feature, art asset or similar must be held against the pillars. You can read more about pillars here.

And you’re reading this blog. It was a year of steady progress, both in design, art and programming. Taking our time, we’ve been able to stay true to our criteria of quality without rushing to conclusions. Concepts had to be tested, validated and critiqued before we could move forward with confidence. We had to be sure that we didn’t put out a game that couldn’t deliver the experience we aimed for.

Firstly, we needed something tangible as a jump-off point. Something we felt was fun, commercially viable and buildable. The first version of the game was a proof-of-concept test of the ‘action-party brawler’-concept, where players would load into and duke it out in an arena with crazy weapons. A quick prototype was built in a month and then playtested, gathering invaluable feedback.

The basic gameplay was fun, but didn’t have enough qualitative depth to pull players back in (just like we had identified in existing casual games). We knew that we needed to do some creative experimenting.

Following that, we wanted to make a more visually appealing and fitting artstyle. The artists started working on concept art and 3D modelling in search of a thematic artstyle we could call our own.

To provide the depth we sought, we whitebox’ed a new level and started designing for depth. Players got more control over their avatars, and there were more avenues of skillful and creative expression. This newer version was tested heavily at the danish ‘Create Jam’ event, getting feedback from a diverse cast of game developers.

Once again, the game showed promise. We had hit a good party-game experience with jam-attendees laughing and playfully teasing each other. But players requested more in-game purpose. They wanted a clear goal to reach.

During a long production period making the internally named ‘Stable Core’-stage, we established the foundational frameworks, made a visually appealing level of our world, and in general improved the quality of our prototype. It featured both basic combat functionality, transforming objects and the competitive game mode, Crown Tag. It was similarly sent out for feedback and comments among friends and mentors.

Some might say it’s a bit of an upgrade.

While the moment-to-moment gameplay was even better and showcased the ‘party’-aspect of our game, the prototype couldn’t showcase much of an adventure. Vision-wise, our game could deliver an experience of ‘playfully teasing’ (with fireballs and swords nonetheless), but not the ‘imagination-filled adventures’. Players wanted a stronger context for playing the mini-games. We needed to update our vision.

So, we held a 3-day bootcamp at Mikkel’s house and clearly defined the vision of the game after all this feedback we had gotten. For example, we found that just entering levels to duke it out in a mini-game didn’t facilitate the experience of adventure. Players had to make the journey and explore the world themselves.

Coming up with appropriate metaphors, we settled on ‘exploring the Project Tumble neighborhood is like going to theme parks with friends’. Every level is its own theme park, every mini-game is a ride, and there’s a whole lot of cool stuff to find. Players will together uncover secrets, complete challenges and duke it out in mini-games, all of which contribute in reaching a common goal. This is what we envision, when we call Project Tumble an ‘adventure-party’-game.

The pillars supporting our game has also been trimmed down and articulated to be more precise and effective, including some razor-sharp questions to ask ourselves during development:

These pillars are notably more experience- and emotion-focused and actionable.

Importantly, we’re still adressing the same initial problems, but our methods and envisioned end-result have been made much clearer.

Now, all this vision talk is tough and can be mentally exhaustive. But…

Every single stage of our development has helped us a lot with articulating the vision for the game, which in turn helps unite the team’s efforts, leading to a better game. The struggles we’ve faced have resulted in a game-concept that is both more innovate, more memorable and, not least, more pro-social (one of our key goals). And we believe it’s even more fun, commercially viable and buildable, as well!

What started out as an ‘action-party brawler’-game has in almost exactly one year turned into the more apt and unique ‘adventure-party’-game. The initial gut feeling about a need in the social multiplayer games landscape has been sculpted into a clear vision.

For example, this flow-chart, which details every step of a player’s journey through our game, has been made by our Game Designer, Sune, since our bootcamp. This kind of modelling aligns the team and helps in directing the whole game development project. 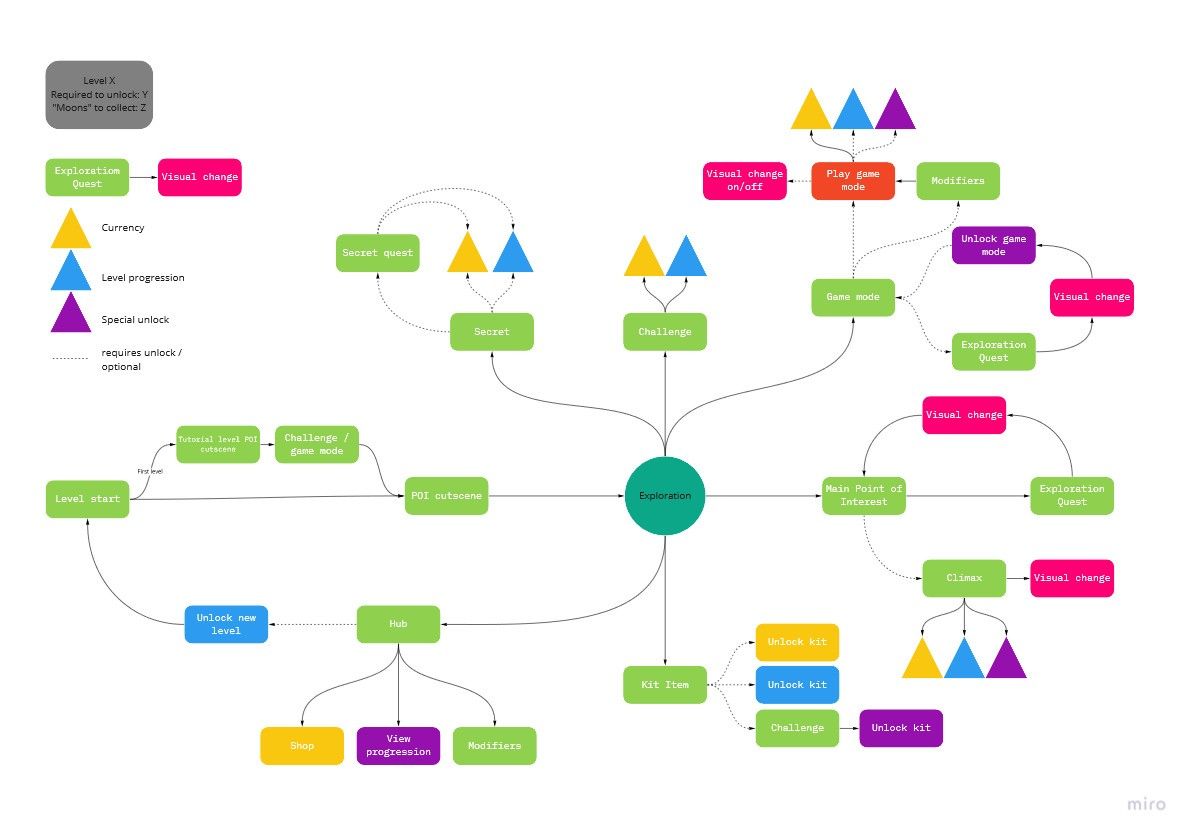 With this chart you can actually already play our game, provided you have a vivid imagination.

Our current goal is to make a vertical slice that competently demonstrates the core experience of our game. We’ve set ourselves a specific target: make an hour’s worth of representative gameplay. Which will, of course, be victim of the same feedback-process all previous stages have been through too, so we can make sure we’re on track moving forward.

Having said all that…

Thank you for reading about our progress from a gut-feeling to a much clearer vision. We hope you found it insightful. The following blog will be about scoping, and how fair limits can lead to creative solutions.